I spent the fall semester of my college junior year studying abroad in Chile. It was by far one of my best college memories and will always be something I look back at fondly. When I got to Vina del Mar, Chile in June of 2007, it was the middle of their winter. And whoa, brother was it cold… as in my host home didn’t have central heating (most homes in central to north Chile don’t). I remember taking a little alarm clock that also told the temperature and seeing it read 42 degrees one morning. I slept in leggings, sweatpants, two pairs of socks, a tshirt, two hoodies and occasionally a beanie and gloves on the really cold nights below my five different blankets. I wore tights under my jeans every day for probably the first three to four months I was in Chile (except for the week we spent traveling in northern Chile in the driest desert in the world). I enjoyed my time in Chile and loved it even more once their spring started. Long walks to my bus stop or to friends’ host homes were much more enjoyable once I was no longer wearing three layers of clothing.

Today was one of those days that reminded me of Chile in the spring. I was walking back from the gym during my lunch break and had an instant moment of deja vu. I couldn’t stop thinking about all the time spent walking around the streets of Vina del Mar with some of the girls in my COPA program. When I think about the warmer Chilean weather, I immediately think of two memories:

1. Interviewing random Chileans with the one and only Caitlin Buck. Our final project for our program’s Spanish class was to make a video about a part of the culture that we found most interesting or had the biggest impact on us and CBuck and I chose to focus on our favorite Chilean food – the empanada. Which means we had an excuse to try empanadas from a bunch of different restaurants and ask random people which kind was their favorite. Her host mom even taught us how to make them from scratch! (Caitlin, I still have this video and the outtakes never fail to crack me up). Anyway, we filmed this video towards the end of the semester in November, so the weather while walking around the plazas and finding people who didn’t think two gringas asking questions was weird was perfect.

Empanadas with Caitlin in the Atacama Desert

2. Our last ice cream outing at Bravisimo with the rest of the COPA program. I went to Bravisimo a shameful amount of times while in Chile and love the picture below from our last time there. 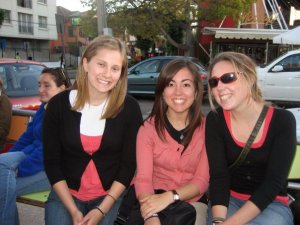 Such good friends that we unintentionally matched

It’s not very likely that I’ll ever go back to Chile, but I sure do love reminiscing on my five-ish months there back in 2007.

3 thoughts on “Remembering Chile in the Spring”