Nothing says spring like fresh flowers, right? I couldn’t wait for spring this year and had been excited for Chip and I to do some flower planting for the first time. While we initially thought my backyard garden would be our first green thumb project, it got put on hold for a bit until we had a small fence built to block it off from the dogs (can’t have them stealing my future tomatoes!). So in the meantime, we turned our attention to our front yard. We really didn’t have much of a vision when we first started. All we knew was that we didn’t really like the way it looked originally, so anything should, in theory, look better. We spent a little bit of time driving around neighborhoods in Alamo Heights for inspiration before heading over to Milberger Nursery a few weekends ago and stocking up on little flowers that we would plant around the oak tree in our front yard. Now when we first moved in, our neighbor kindly warned us that nothing would ever grow around this oak tree except for weeds and that it was bound to kill anything we tried – grass, flowers, plants, etc. Luckily this hasn’t been true!

The first thing we had to do for this flower project was to pull out all of these little weed things that were growing around the tree. It doesn’t seem like much work, but let me tell you those suckers really put up a good fight. I’m pretty sure I would have thrown in the towel and let them win if Chip hadn’t been so determined! I also have a bit of an expectations problem and after seeing how quickly my parents would de-weed our yard growing up, I was not happy that this small area took us about two days to empty out. We went through several rounds with these weeds, first pulling up the ones that would come out somewhat easily. Then we had to use a small pick to dig the others out, exposing some very deep roots we weren’t expecting. These weeds may be small, but most had roots that would extend out a good six inches or so that we would just have to hack off with a small garden axe.

Once we eventually cleared out the area under the tree and had tilled the soil with organic compost, it was finally time to start planting these flowers. While at Milberger’s earlier that day, we realized that impatiens were our best bet for this area since they are pretty shade tolerant (we did make the rookie mistake of just picking pretty flowers at first before an employee kindly let us know that we were wasting our money not getting shade resistant flowers to plant under a tree….). We didn’t buy enough flowers that day to fill the whole area, so the following weekend had us over at Lowe’s, stocking up on more flowers and adding zinnias to our mix.

Planting flowers for the first time in my life 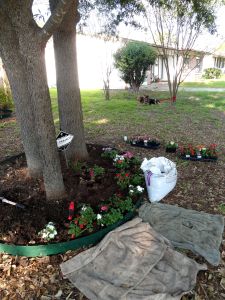 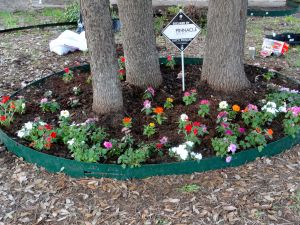 Now, of course I was a little worried that these small flowers would slowly (or not so slowly) die off. They were the least expensive flowers we saw at both stores, so I subconsciously thought this meant these flowers would be weak and that all this work would be for nothing. Luckily these flowers have proven to be heartier than I had expected (except for the zinnias, those are struggling a bit…). Anyway, here’s what the area looks like now a few weeks later! 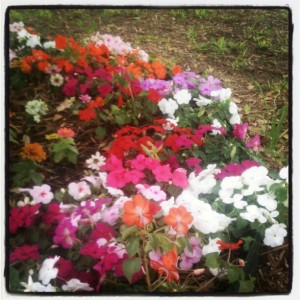 I’m really surprised with how full those little impatiens are getting. I’m thinking of take most of the zinnias out and just putting more impatiens in, but it’s not at the top of our yard work to-do list :)

Now while I had been planting these flowers, Chip was clearing out one of the flower beds in front of the house. We will eventually get rid of all of the bushes in the front yard and replace with flowers, but we haven’t finished this yet.

Chip clearing out the old plants

For now, we’ve planted two small hydrangeas and two blue plumbagos in this flowerbed. These are actually two of my favorite flowers and it means so much to me that Chip has given me complete free reign to plant whatever I like around our home. I’ve always loved how full hydrangeas are and was very happy to see them on sale at Lowe’s a few weekends ago. We’re hoping they’ll get full/big enough so I can have fresh-cut hydrangeas in vases inside :) As for the blue plumbagos, these are flowers that I’m pretty emotionally attached to. We had them in our backyard growing up and my beloved childhood dog, Scottie, loved to lay in these flowers on hot Tucson afternoons. Because he was a sheltie, those little flowers would get caught in his hair so we always knew when he had been resting near my mom’s flowers. We had to put Scottie down when I was 17 and buried his ashes by his beloved plumbago bushes, so I always knew that these would be flowers I would want in my own home as an adult. Luckily Chip agrees that they’re pretty, so they are now part of our front yard :) Showing once again that we are gardening rookies, we didn’t measure the area of the flower bed before we bought these hydrangeas and plumbagos, so half of it is still empty… haha I’m hoping we’ll fill it up in the next week or so, but in the meantime here’s a quick picture of our blooming flowers. 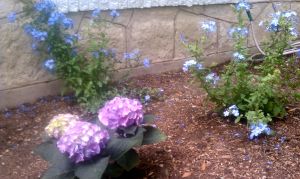 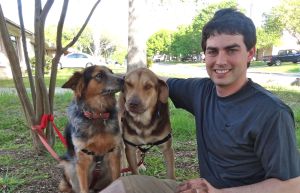 Taking a break with Wrigley and Duke 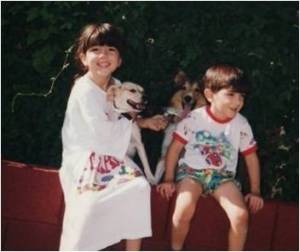